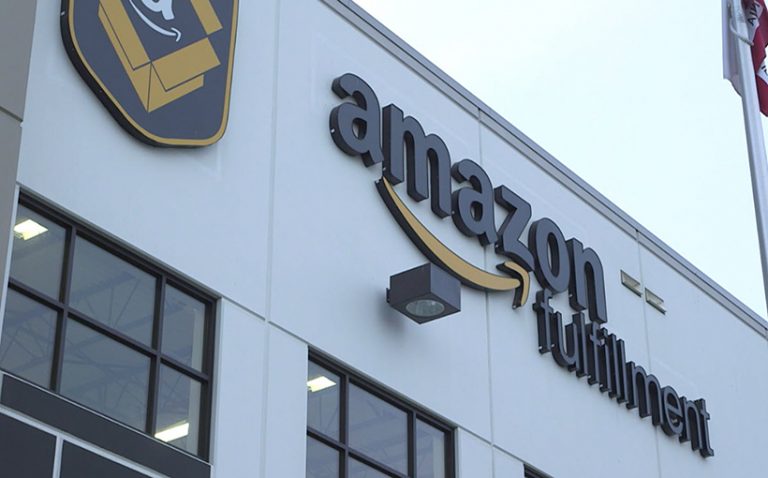 En route to fulfilling its goal of same day and next day deliveries, Amazon has been building new Fulfillment Centers and Delivery Centers throughout the U.S. Several of these facilities have been built in Michigan. Motor City Electric Co. was selected to provide electrical contracting services for Amazon’s “Project Mercury”, the 855,000 sq. ft. fulfillment center on Ecorse Road in Romulus. Our work included incoming and branch power, site and inside lighting, generators, fire alarms, and access control. In addition to the main warehouse, we completed electrical installations for the loading docks, kitchen, cafeteria, and offices. 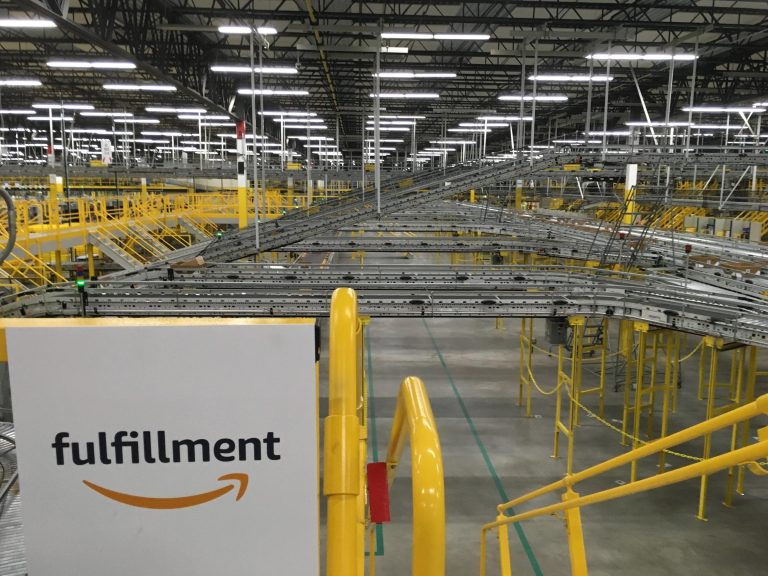 The MCE Fab Shop played a significant role for this project, assembling lighting fixture feeds, disconnect racks, and cord drops in the shop that were then delivered to the job site for installation.

Roughly the size of 14 football fields, Amazon Romulus opened for business in July 2018 and employs 1,500 workers. The company’s fulfillment centers are so automated and filled with conveyors and robots that Amazon bought the mobile robotic fulfillment systems company! Amazon purchased Kiva Systems LLC in 2012 and renamed it Amazon Robotics LLC.

In the Amazon Fulfillment Centers (warehouses), workers don’t go to the shelves – the shelves come to them. Products that arrive at the fulfillment center first have to be put into the system by workers. The items arrive in yellow plastic tubs. A worker in the stowing station pulls a package from a tub, scans it into the system, and pops it into an empty slot on tall, yellow portable storage units (pods). When the pod has no more empty slots, the employee hits a button and the pod whirs away into the depths of the warehouse while another slides in behind it, ready to be filled. 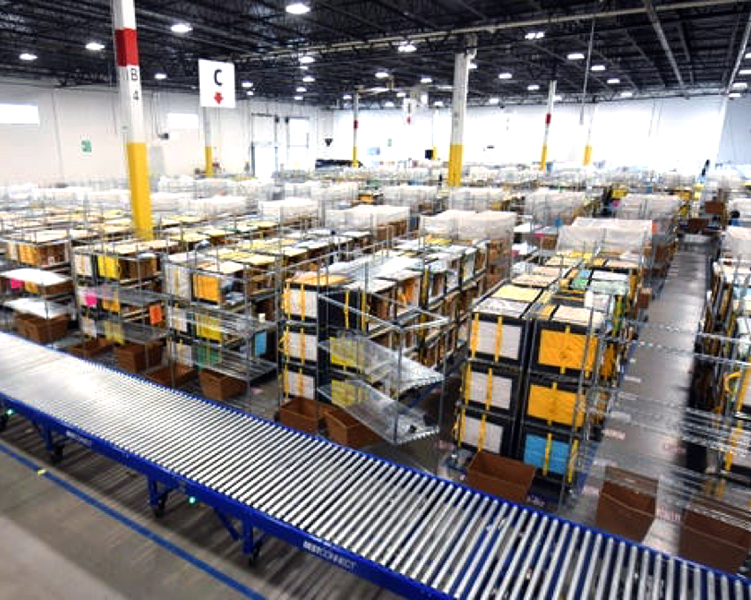 The process takes just a second or two. As soon as an item is scanned and stored in a pod, it becomes available to the customer. Items can be called up by workers at different stations to process customer orders.

When an order is entered into the Amazon database system, the software locates the closest automated guided vehicle (bot) to the item and directs it to retrieve it. The short, orange bots navigate the warehouse by following a series of computerized barcode stickers on the floor. Each drive unit has a sensor that prevents it from colliding with others. When the bot reaches the target location, it slides underneath the pod and lifts it off the ground through a corkscrew action. The bot then carries the pod to the specified human operator to pick the items. Imagine a Rumba vacuum, but bigger and square, with a circle on top that can lift and cart off the shelves! 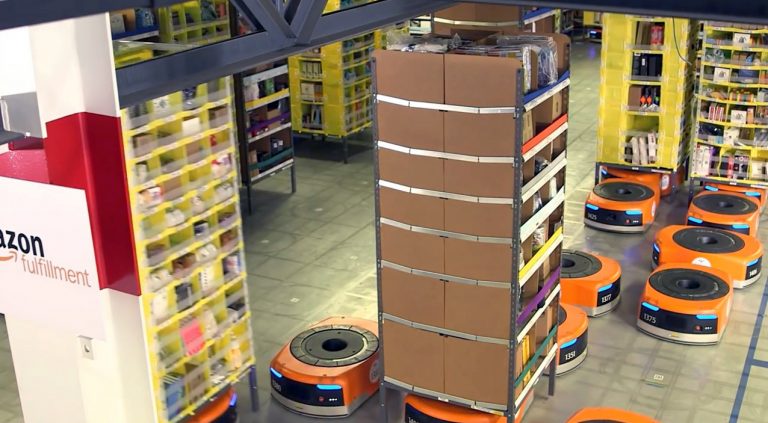 The bots are battery-powered and need to be recharged every hour for five minutes. Smaller bots measure approximately 2 feet by 2.5 feet by 1 foot high and are capable of lifting 1,000 pounds. The larger bots can carry pallets and loads as heavy as 3,000 pounds. The maximum velocity of a bot is 1.3 meters per second or roughly 256 feet per minute or 1 mile in a little more than 20 minutes – the average time it takes most people to walk a mile. But the automated system is much more efficient and accurate than the traditional method of workers traveling around the warehouse locating and picking items.

The rest of the facility is a dizzying network of conveyer lines. Amazon says if you laid out all the conveyers at the Romulus facility end-to-end, they would stretch more than 10 miles.