The lights are coming back on in the city’s neighborhoods.

Detroit’s Public Lighting Authority is about six months ahead of its ambitious timetable to relight all neighborhoods by the end of the year. Officials say the installation of nearly 40,000 LED streetlights will be complete by the end of July.

“It’s already changed things. The streets, corridors and the thoroughfares, they are lit up. It looks nice around here now,” said Rudolph Bartlett, a west side resident and safety director for Detroit-based Motor City Electric Co., one of three contractors for the project.

“There’s not a spot we don’t go where people don’t compliment us,” Bartlett told The Detroit News last week, as he monitored a work crew installing a new wooden light pole on Rosa Parks Boulevard in the Boston Edison neighborhood. 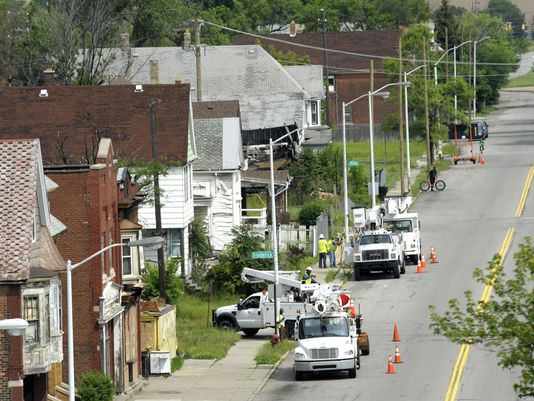 The neighborhoods are about 98 percent complete, with final installations taking place in every ZIP code.

The quick progress has enabled the authority to advance its schedule for beginning work on Detroit’s major thoroughfares — a task that had been slated for next year, says lighting authority director Odis Jones.

That work, on streets including Michigan, Fort, Gratiot, Grand River and Jefferson, will get underway within the next month, he said. Lighting work for the entire city is slated to wrap up by the end of 2016.

Resident Lamar B. Smith is looking forward to it.

“It’s been time. It’s been past time,” said Smith, a 65-year-old Navy veteran who lives downtown.

But Jones says the task is far from easy.

“We are charged with rebuilding a system that has failed for one reason or another for the last 40 years,” he said.

Some of the infrastructure on Jefferson has been in place since the early 1900s, and about 80 percent of the lights have not been working for at least two decades.

“That’s going to be an extensive project. We literally are going to rebuild the entire street lighting grid on Jefferson,” Jones said. “It’s got a lot of what I call duct tape on it.”

By the end of the year, the authority is aiming to have the city’s collector streets, which represent areas that funnel into its major roadways, done as well as some of the thoroughfares.

The authority finished all of its overhead residential lighting work by February and the underground should wrap up by the end of next month.

Jones said the authority converted to an overhead street lighting system to curb theft and vandalism. In a move to discourage scrapping, crews are replacing the existing copper wiring with aluminum.

“That opportunity (for copper theft) won’t exist anymore when we are finished,” Jones said. “We wanted to be smart about the investment we made.”

The state-created lighting authority was authorized by the Michigan Legislature in December 2012 and approved by the Detroit City Council to design and implement a three-year plan to improve the city’s lighting system.

The entity is authorized to issue bonds to finance capital costs for system upgrades and earmark $12.5 million per year from the city’s utility user tax to finance the bonds.

It sold $60 million in bonds in December 2013 to fund the initial phases of the project. Last June, $185 million in new bonds were sold.

Jones said about $70 million has been spent.

The lighting plan ultimately calls for about 65,000 streetlights between the neighborhoods and main roadways.

In neighborhoods, the authority has been installing one light at every street corner and in the middle of each block longer than 300 feet.

In January 2014, the authority board members opted to install only LED lights to provide brighter and more cost-efficient illumination.

“Our main roads are being lit to a standard that you will be able to read a magazine at night,” Duggan told the crowd late last month. “We are making some progress.”

Two years ago, the city had a backlog of approximately 3,300 lighting complaints — and 40 percent of its 88,000 streetlights were not working.

The lighting authority is responsible for all the newly installed lights and aims to respond to reports of any that are broken within five days. The average response is two to three days, Jones said.

The authority has a partnership with DTE Energy to offset staffing needs and aid in repairs of the system. The city is slated to exit the electricity business by migrating customers to DTE over a seven-year period beginning in fiscal year 2015.

The authority has about 200 people working on the project daily between its staff, DTE workers and contractors. Jones says more workers will be needed for the underground work.

Jones said streetlights are being vandalized in some areas. The authority, he said, has been monitoring the incidents and working closely with police.

“Any major city is going to experience some of that, so we’re no different,” he said. “Unfortunately, there are still some businesses that don’t enjoy operating in light.”

Posted by Laura Zimmerman on June 15, 2015 under General, In the News, Projects