Carhartt is still a few months away from opening its first retail store in Michigan, but one thing’s for sure already. It will certainly get noticed, when a big mural appears overlooking I-94 at Cass Avenue, on a 200-foot-wide wall of the three-story building in Midtown Detroit where Carhartt is now setting up shop.

“We’ll have an artistic mural, done by a local muralist, that pays homage to Detroit and to the brand,” Jamie Millar, Carhartt’s vice president for retail, told me Tuesday during a sneak-peek tour of Carhartt’s construction site. The mural, which will cover what’s now a graffiti-marred wall, will comply with city guidelines that restrict blatant advertising on exterior walls of historic buildings.

Dearborn-based Carhartt, a 126-year-old maker of rugged jeans, jackets and work apparel, has long sold the vast majority of its products through wholesale outlets, but began establishing Carhartt-owned retail stores about five years ago – and now has 17 such locations nationwide. Detroit will be the 18th. 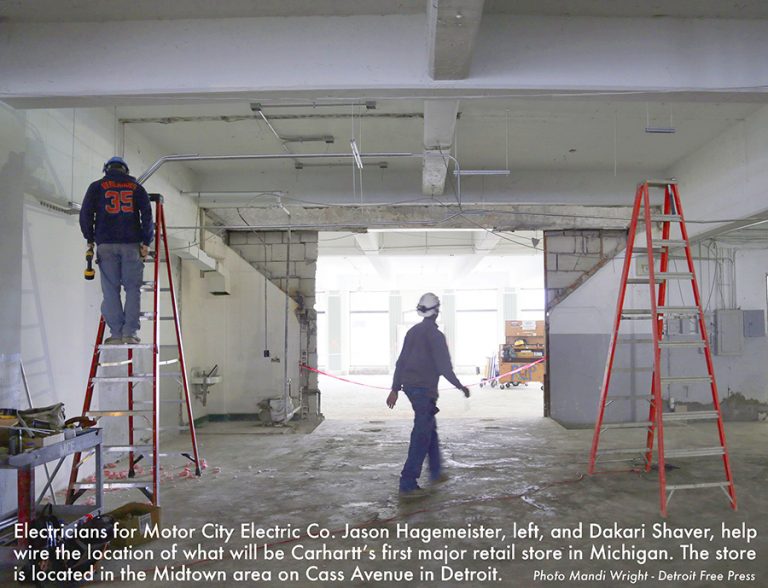 worldwide including more than 400 at its headquarters, has long wanted to put a flagship retail store in Detroit, and spent more than two years looking for the right site.

In January, it leased a 51,000-square-foot art deco structure in Midtown that was built in 1928 and listed in the National Register of Historic Places in 1986. It housed the Marmon Motors auto dealership and later Cass Motor Sales.

Millar said the Midtown retail store will employ 12 to 15 people initially when it opens, probably in August or September.

Carhartt’s opening will be the latest in a string of new retail activities in Midtown and downtown Detroit, ranging from the HopCat craft beer bar, Selden Standard restaurant, Shinola watches and bicycles and the entertainment district taking shape around the Ilitch family’s new hockey arena project.

The company has been encouraged in recent years that young people and other consumers have given the Carhartt brand some fashion cachet beyond traditional sturdy work clothes. The success of some niche retailers of luxury goods in Detroit also caught their attention.

“Shinola was part of our litmus test,” Millar said, “and helped give us the courage to come here.”

The retail sales floor and some office space will take up 5,600 square feet of space on the first floor, where the design will evoke the ruggedness of the brand, using reclaimed lumber and timber. Carhartt is looking for other tenants to occupy the second and third floors.

There are also more than 100 parking spaces inside the three-story building, which was a major advantage of the site, he said.

While Carhartt is now preparing to occupy a building that has been vacant for 40 years or so, it’s a pretty good bet that the place won’t go unnoticed for much longer, since about 150,000 cars a day pass by the site at I-94 and Cass.

Posted by Laura Zimmerman on May 14, 2015 under In the News, Projects